No matter how dark the day seems, make time for things that bring you light.

Many people say January and February are the gloomiest time of year. I always think it’s the few weeks before the Winter Solstice when the days are still getting shorter. In many places the sun hardly gets above the trees. I always want to make bright cheerful items during this time of year. Today, I made two 10 minute table runners. One for under our Christmas tree and one for on the main table. Some fun Christmas buttons would make these complete.

Given this is the rainy season in the PNW, it’s fitting my first liberated wip of December is the Portland Rainchaser. I love the design on this hat, but it was somewhat fiddly to knit. Normally, having two different colors going wouldn’t bother me. This knit had four strands going at once since I was holding lace doubled. I was excited when I reached the crown shaping. The British Hubby has claimed this hat. Apparently, yarn fumes at the yarn store made me forget I can’t wear alpaca. Oddly enough, I can knit with it but even the small amount on my ears made me itchy.

This week, the British Hubby and I were craving carbs. I made not one, but two loaves of fresh bread. The first is a lovely crusty french bread. This one is great for lemon curd. The second loaf is a light Rye. It has a hint of orange. I love this one toasted with cheese.

Over the weekend, it’s gotten much colder here. I caught Ernie snuggling with Gracie. 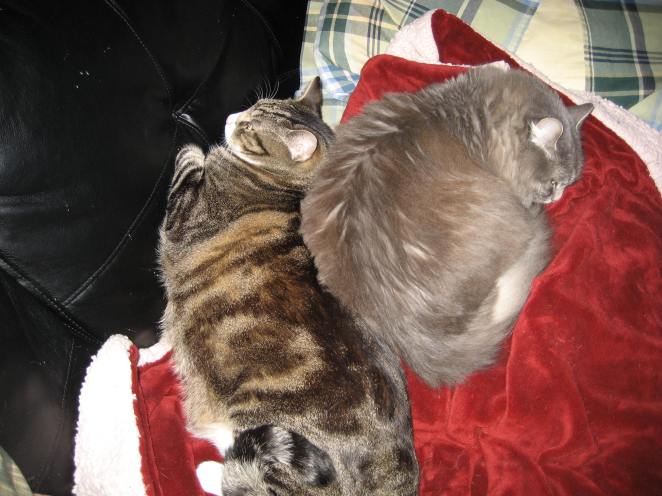 2 thoughts on “Crafting Lights the Way”