Cake is for life not just birthdays.

Several months ago, the British Hubby caught an episode of The Great British Bake-Off (he calls it, Bake or Die) with me. They were making Battenberg cakes. The British Hubby mentioned he remembered having that cake quite a bit growing up, and it had been at least a decade since he had one. Naturally, when I found a Battenberg recipe in Baking with Mary Berry, I knew at some point we were going to attempt to make this cake.

Once I realized the chances of me finding a proper Battenberg cake pan at the thrift store were slim, I decided to purchase a can pan that was made by the Brits. They’ve been eating this cake since 1884 when Princess Victoria, granddaughter of Queen Victoria, married Prince Louis of Battenberg. This cake pan has three removable slats. You can see above, I decided to split the pan in half with my cake mix. This was my first attempt at making a cake like this from scratch. I thought it would be easier to cut the each cake in half than make four cakes.

As I’m relatively new to cake baking, I thought checking the cake five minutes early would have been enough. I should have checked after 25 minutes. When the cake is dry, it’s more likely to crack or break (ask me how I know). Nothing some extra apricot jam couldn’t cement back together.

The British Hubby helped out with the almond paste. He’s idea was to put a layer of jam on the paste to help it stick to the cake. At one point, I may have given him incorrect cake measurements so we had to do a bit of patch work on one side.

Once sliced, it looks pretty professional. 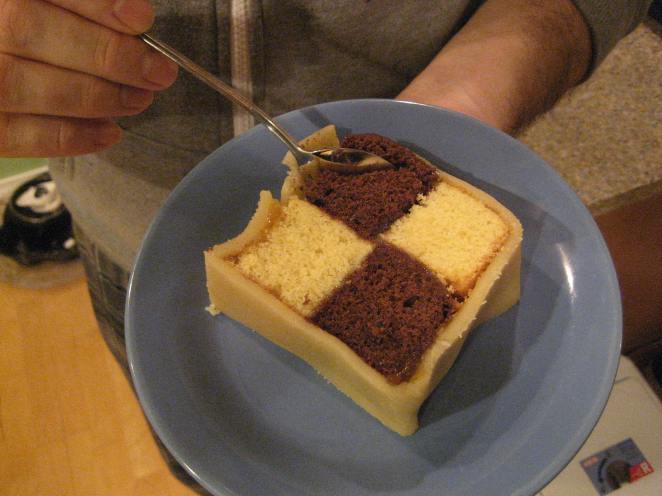 We had a great time making this together, but I don’t think we’re ready for the big stakes of Bake or Die. It was sort of intense and humorous putting the cake together. Next time, I might try this with strawberry or raspberry jam. Yum.