The owl was the symbol for Minerva, the goddess of wisdom. The Enlightened Ones see themselves as the wise rulers of the planet.

Austin is one of my favorite cities in Texas. The British Hubby and I lived there for a little over three years. It has some unusual architecture and conspiracies. The Frost Bank Tower was one of my favorite buildings to drive by or see lite up at night. 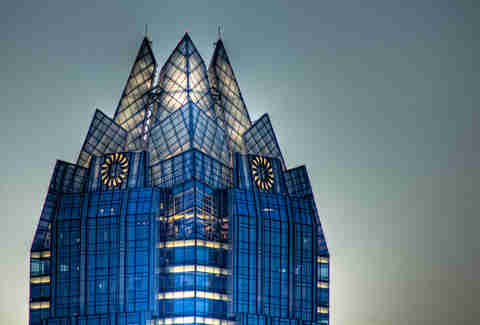 Some say it was built by a Rice graduate. Others say it’s the Illuminati’s presence in Austin. Personally, I think it’s a tribute to night life and late night knitting. Maybe it’s a secret knitting society? Would they have very exclusive patterns? Or very exclusive yarns? Or special equipment? I bet they have their own iron on badges and project bags.

Maybe they only knit adult themed items with cashmere like this eco-cashmere. Can’t you just imagine knitted items for your rude bits with this yarn? It’s amazingly soft like kitten fluff and clouds. Did I mention my LYS is moving to a bigger space? How could I resist this yarn to make Roscoe Scarf in Arctic Shadow? That’s the start of my Arctic Shadow. I suspect I’ll have to make one for the British Hubby next.

Cat Conspiracy: My bowl is empty! Where’s all the tuna I ordered?

One thought on “Conspiracy: The Frost Bank Tower”