I attribute my success to this: I never gave or took any excuse. ~ Florence Nightingale

Last week we got off track with our Godzilla movies. We should have watched Ghidorah, the Three-Headed Monster. This movie was produced in 1964 and was the first Godzilla movie in color. It’s the fifth movie in the Godzilla anthology. The premise is slightly different than previous movies. Instead of Godzilla simply wrecking havoc on man kind. Mothra the larva convinces Godzilla and Rodan to work together to beat Ghidorah, the King of Monsters. There’s also a subplot with an assignation of the Princess. She survives the attempt only to suffer amnesia believing she’s an ancient race from Jupiter. The fight scenes between Godzilla and Rodan before they agree to work with Mothra are fantastic. I love that the Japanese keep coming up with new and interesting monsters for Godzilla to fight. It wouldn’t be a Godzilla movie with out natives singing and dancing. I’ve grown quite fond of the twin faieries that have a connection to Mothra. Their song is quite catchy. I find myself singing it while I do chores around the house. I wonder if I could call up Mothra to battle my foes or maybe defend my yarn stash?

I think this would make one bad ass knitting guild if all four of them banded together. Think of how indestructible their yarn would be.

We had our traditional Godzilla movie watching food, stuffed jalapeno peppers and a bottle of Cheep and Cheerful. I’ve tried several different bottles of rose since the first Cheep and Cheerful. So far, Band of Roses is my hands down favorite. The cheaper bottles were drinkable, but weren’t quite as good. I had to try them to know for sure. I’ve bought several more bottles of Band of Roses and even started giving it as birthday gifts to my coworkers.

Of course this Japanese movie had subtitles. That means I need to pick an easy knitting project. Awhile ago, I started knitting a baby sweater. It’s all garter stitch so it’s sort of boring, but great for reading subtitles. Here’s the first part of my Cascading Macaroons. Maybe I’ll actually finish this before the baby out grows it. 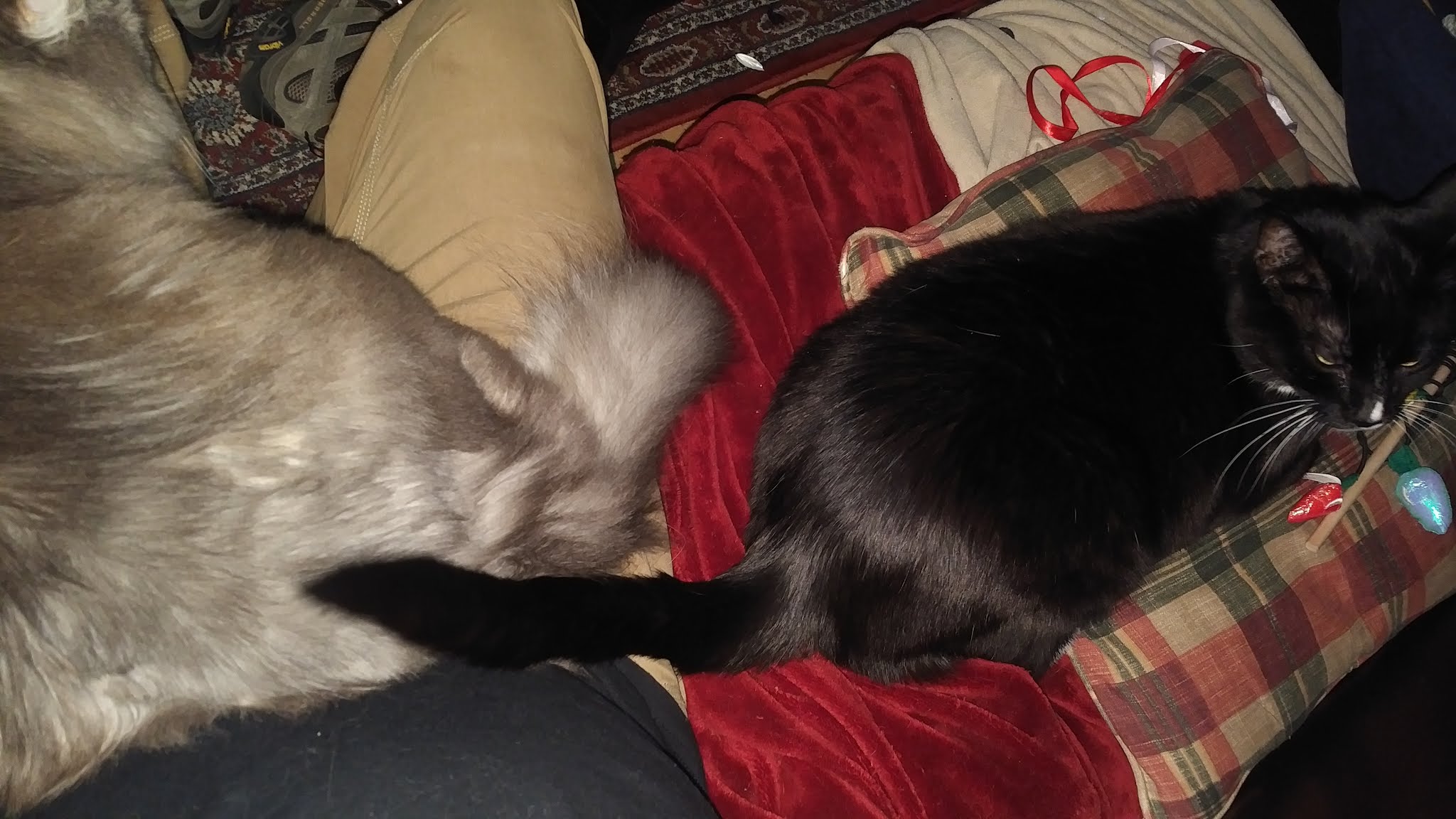 The kitties were engaged in their own challenge. The battle of the tails. As you can imagine, this ended with Gracie hissing at Burt. Good thing neither one of them can breathe atomic fire.

One thought on “Team Work Saves the Day”