He that plants trees loves others besides himself. ~Thomas Fuller

Friday night has become Godzilla movie night at our house. The next movie on our list was Mothra vs. Godzilla. The movie started with a typhoon that dislodged a huge egg from Infant Island and ended up on the shores of Japan. You may recall from previous movies, Infant Island is where the H bomb was tested. That testing is responsible for over-sized creates and insects. 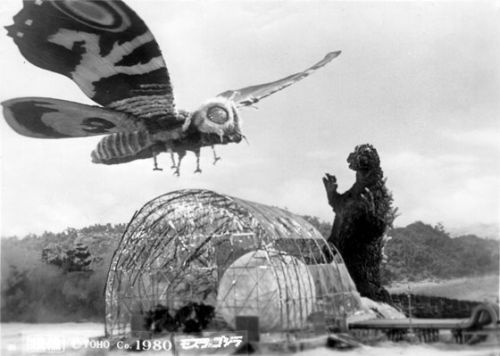 It was unclear if Godzilla had survived King Kong in the last movie. It turns out Godzilla had been sleeping under the sand. The typhoon helped set him free. I didn’t think Mothra was going to have much of a chance against Godzilla. Godzilla has survived numerous high voltage electrical shocks, an oxygen destroyer and an icicle avalanche. It turns out wind and silk webbing are Godzilla’s nemesis. The fight with Godzilla takes it toll on Mothra. She only wanted to protect her egg. These two twin imps have a connection to Mothra and are able to convince her larva to hatch by singing. This movie was fantastic. It had singing, dancing, egg eating and silk thread production used as a weapon. I don’t think fiber lovers would be excited to see over-sized moths in their wool collections, but maybe they could create an indestructible fiber so Godzilla could finally get that hand knit cardigan?

Mothra vs. Godzilla was action packed so there were less subtitles than previous Godzilla movies. I thought it was  a chance to make some progress on my 1500 Yards of Adventure Knitting. The purple block is growing, but it still has several more inches to go.

Normally, we have stuffed jalapeno peppers for our Friday night movie. Last week, we had to go with stuffed mushrooms. I prefer the stuffed peppers.

Burt’s trying to look fierce here, but he just looks so cute!